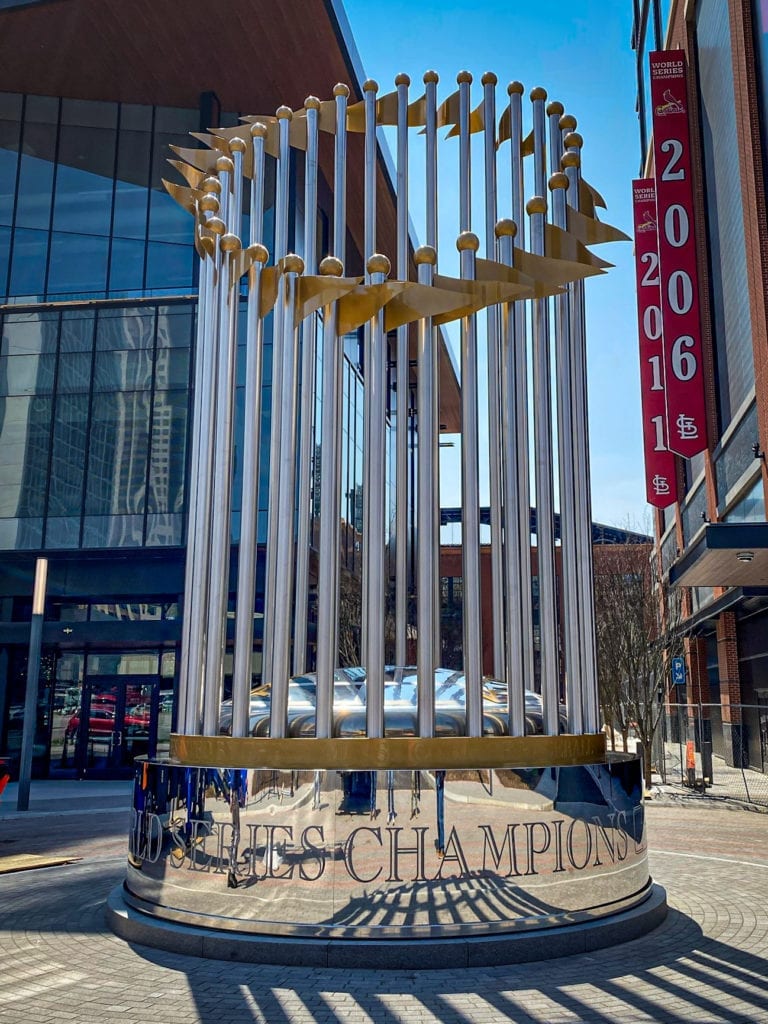 A highlight of this year was collaborating together with a long-time customer and vendor, Archetype, to create a super-sized MLB trophy outside of Ballpark Village St. Louis. Archetype, based in Minneapolis, is a custom sign-fabrication partner to JIT Companies. Angie Carpenter, Chief Operations Manager at JIT Companies, noted that JIT  has worked  on various projects with Archetype,  especially flat cut letters and brushing sign panels, “Our very first project with Archetype was Caribou Coffee signage elements, over two decades ago!”  The recent super-sized Major League Baseball trophy has been the first high-profile project that JIT Companies had a major role in with Archetype. Being asked to be part of this project was both exciting and a privilege even though it presented some interesting challenges to deal with along the way.

Challenges with Creation of a Giant MLB Trophy

“To construct a replica of the Major League Baseball World Series Trophy doesn’t sound like such a big deal until you realize it was going to be super-sized to 35 feet in height and over 15 feet in diameter, ” pointed out CEO of JIT Companies, Ron Beltz. The Archetype Project Lead, Chris Haar, and other members of the management team at Archetype were looking for a vendor that could handle certain aspects of the project.  “JIT Companies was ready to step up to the challenge of waterjet cutting and polishing the stainless steel components that make up this structure, which included the curved side panels with etched text and toe kick, mirror polished top dome along with the 30 flag poles that grace the trophy perimeter. After discussing all of the issues that were presented during team meetings and who would be handling each aspect of the project, JIT set out to take on its portions of the project. Nothing comes easy on a project of this scale. The first issue that the team at JIT encountered was how to finish the 35-foot flag poles which required extensive modifications to our centerless grinding finishing equipment. Next, came the cutting and rolling of the exterior side panels that needed to be masked and surface-etched with the World Champions St. Louis Cardinals moniker. “Although this material was pre-polished, great care needed to be taken to prevent any surface scratching during fabrication. The stainless steel dome was spun-formed from ¼” material and polished to a mirror finish. Masking and etching on a curved surface proved challenging but was also overcome in time,” said Beltz. Once all of the material was processed, special fixtures were constructed to move all the material to the next stage of passivating. Then it went back to Archetype for their fabricators to bring all of the components together for final test fitting.

“To construct a replica of the Major League Baseball World Series Trophy doesn’t sound like such a big deal until you realize it was going to be super-sized to 35 feet in height and over 15 feet in diameter.” – Ron Beltz, CEO of JIT Companies Colin Carpenter is the Operations Manager at Archetype, and even though he has been there for nine years, he admitted this project was unlike any other, “This was definitely a structure for which we did not really have a logistical playbook in terms of how to efficiently maneuver and work with the various components at play due to the sheer size of everything and the fact that all components had to look beautiful and pristine. We had to ask ourselves, ‘How are we going to transport and work with 30 pipes that range between 20’ and 30’ and collectively weigh in the thousands of pounds without anything getting dinged up?’ It forced us to try to come up with solutions that we did not need to come up with before. We had to build several carefully engineered support “cradles” for our pipes that allowed them to be safely stored, transported, and picked by us and our various vendors to do the necessary brushing, passivating, and assembly. We had to make sure these cradles had enough steel bracing and only carried a certain number of pipes in order to prevent them from collapsing in on themselves and ruining the product. The polished base was too wide to fit through our garage door so we needed to design a steel support system on which the base could rest vertically in order to fit through our garage door where it could then be hoisted onto a truck via crane. Getting this enormous base from a horizontal to a vertical position was a terrifying song and dance between cranes and lifts that was pulled off with great success (but also probably took a couple of years off my life).” 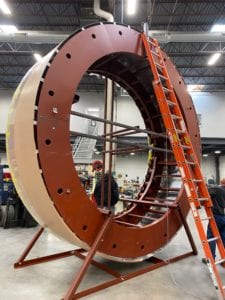 The partnership between JIT Companies and Archetype has continued to get stronger over the years as they collaborate on more projects together. Colin explained, “JIT has always been a valued partner of ours with all kinds of projects. They share a very common vision with us in terms of what it means to turn out a high-quality product in a timely manner. They have great attention to detail and have always turned out beautiful finishes on metal components we have needed polished or brushed. When this project came across our desk, I knew immediately that I could trust Ron, Angie, and their team with knocking this project out of the park – especially when this project resembled more of an artistic display than mere brushed dimensional letter signage.”

“JIT has always been a valued partner of ours with all kinds of projects. They share a very common vision with us in terms of what it means to turn out a high quality product in a timely manner…”
– Colin Carpenter, Operations Manager at Archetype It Takes a Village to Build a Giant Trophy….

There is the old proverb that says “It takes a village to raise a child” – well that certainly rang true for what it took to get this project across the finish line.  Colin affirmed that plenty of people and companies came together and had a hand in making this thing a success, “We leaned a lot on JIT to ensure that the finishes on the dome, the base panels, and the pipes matched our controls and were as close to flawless as possible – which is an incredible feat when you factor in the square footage of material that they finished for us. We had passivators that needed to dip every single stainless steel component into tanks to prevent them from rusting. We had steel fabricators that had to roll the stainless steel base panels to perfection so that everything lined up around the base. We had freight operators and rigging professionals that helped get every component from point A > B > C > D. We had designers that made sure that everything was going to fit together and that nothing was going to collapse and fail while in flux. We had our own fabricators that had to put the thing together at the end. And then you had Ops guys like me just doing their best to keep everyone on the same page. And that is what I really loved about this project –  just the amount of coordination and communication it took to pull off. Every vendor had a say in this thing in what we could do to make their life easier and increase the probability of success… and we took that feedback very seriously…And I think that really contributed to the success of this project.” 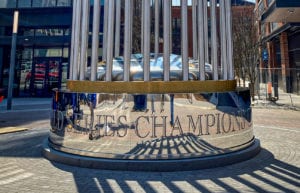 “JIT is a company that is never going to let you down. Even when things get dicey and there is a lot on the line, which was definitely the case with this project at times, they aren’t going to hang you out to dry. They are going to do their best and give all their effort to making a project successful. They are also going to give their opinion on what will or will not work – and they know what they’re talking about so you should listen. And that is why they have essentially guaranteed my business – I trust them and I respect their body of knowledge, expertise, and work.”
– Colin Carpenter, Operations Manager at Archetype

Want to see video footage of the creation of the Ballpark Village – St. Louis Cardinal trophy replica? Check out this Emmy-Award Winning video here. We couldn’t be prouder of how the MLB trophy outside of Ballpark Village St. Louis turned out.  The Archetype team is an amazing bunch of creative minds that are able to collaborate with various teams and contractors to create beautiful designs. It is together with talented vendors like Archetype, that JIT Companies is able to create unique, functional solutions every day, Whether your project is big, small or gigantic, JIT Companies can help. Request a quote today or call us at 507-326-5240 to see how we can help you with your next big project,  you’ll be glad you did.

Fill out the form below to sign up for our newsletter.